Originally it was only a vegetable and flower garden with a garden nursery, situated in the close vicinity of the original castle. From 15th century its function and look changed and in 17th century it was rebuilt to be a baroque garden stretching right from the chateau to the staircase by the river. In 19th century the garden was rebuilt to become a park with 64 hectares in area, using regulation of the river Morava and draining the marshy flood forests. It is one of the most significant European parks because of the liberal use of the water system with streams and ponds, botanical compositions of meadows and groups of trees with romantic buildings (Pompeian Colonnade, Peacock Courtyard, Fisherman Pavilion, Colloredo Colonnade) and sculpture decorations (a bust of archbishop Rudolf Jan, a bust of Archbishop Somerau-Beckh). 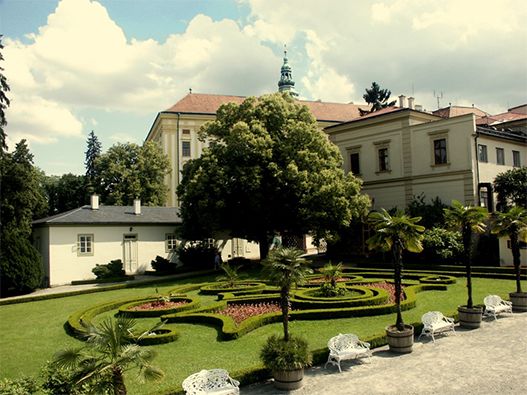 The cellars were founded in 1266 by Bishop Bruno of Schauenburk. By decision of King Karel IV from 1345 the cellars received the right to mass produce wine according to Vatican standards. The cellars are a part of Archbishop chateau in Kroměříž, placed underground at the depth of 6.5 metres. Their area is 1030 m2 and are divided into "Horní" (Upper) and "Dolní" (Lower) cellar. In the cellars the temperature is the same all year long – between 9 °C and 11 °C. There is a suitable environment for making mass wines that are purely natural and of the highest quality. The production of wines has a centuries-old tradition and now, at the beginning of the third millennium, it has continued for 735 years. In the cellars the oldest parts of walls of the gothic castle from 13th century are preserved, the walls of the cellars are covered by fine mildew. The wine matures in historical wooden barrels of different sizes. The largest barrels can store 19 100 litres and the oldest barrel is from 1805. 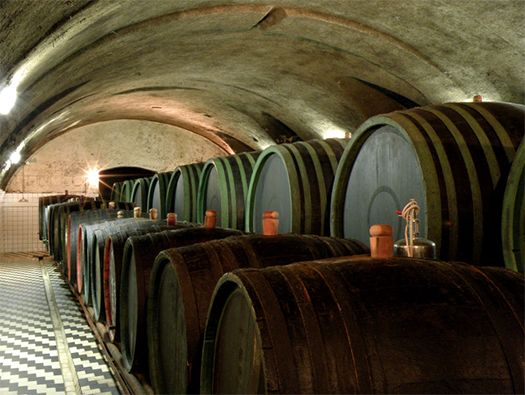 The Mill Gate was a part of the fortification of the town. Its early Baroque style is marked by a preserved fragment of painting of the front of the tower which documents the participation of Bishop Karel II of Lichtenstein in the renewal of Kroměříž. The gate got its present look in the second half of the 19th century, partly according to the project of architect Antonín Arche. It is the last preserved town gate. Other two, Vodní (Water) and Kovářská (Blacksmith), were torn down between 1855 and 1857. The road to important town buildings outside the town walls, especially to the mint, the mill and the brewery, led through Mill Gate. 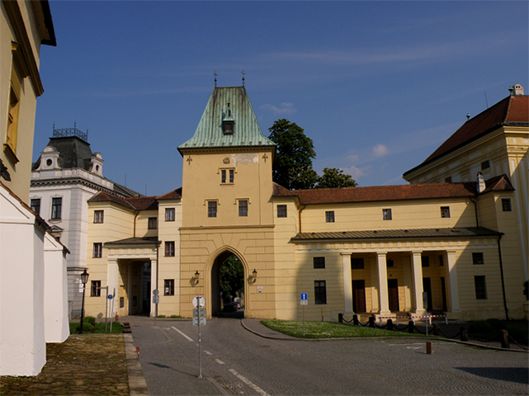 The representative residence of Olomouc Bishops and Archbishops. The building was founded in 13th century and has a rich history. Apart from unique Salla Terrena and lushly decorated halls, visitors can see artistic collections that were gathered by the clergy over the years. There is also one of the largest galleries with a famous painting "Apollo and Marsyas" by Tiziano Vecelli, a unique library and a music archive. From the chateau tower, which is 84 metres tall you can see almost the whole of Moravia. The chateau has been a UNESCO monument since 1998.

The rise and development of the chateau is connected with the history of Olomouc episcopate and archiepiscopate – after the destruction of the original gothic-renaissance palace by Swedish armies in the Thirty Years War, Bishop Karel II ofLiechtenstein-Castelkorn built a spectacular early Baroque residence of Olomouc bishops, which still represents their social, political and cultural importance. It got its Italian style from the architects of Vienna Imperial Court, Filiberto Lucchese and Giovanni Pietro Tencalla. The chateau is not only a unique historical building, but also a living research centre holding lush collections of paintings, books and music that have their roots in the enlightened activities of collectors over several centuries.

Originally a boy’s seminary, this was built between 1857 and 1860 by Josef Erwin von Lippert in late Romantic style. The chapel, which is a part of the complex, is from 1859. Between 1910 and 1914 the seminary was extended. 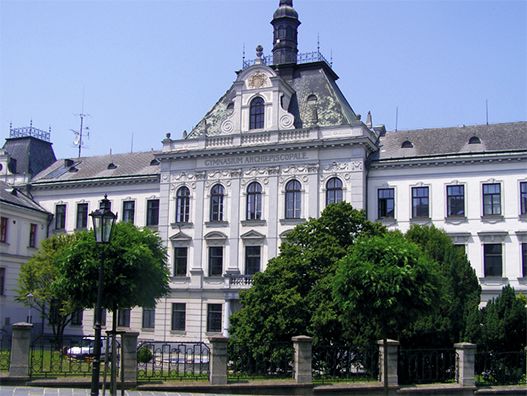 The church is located on the site of an original Gothic church from 13th century that was destroyed during the Hussite wars. The new church was founded by Bishop Bruno of Schauenburk (1245-1281) probably shortly after 1262 when a collegiate chapter house was established. At the end of 14th century a vicar sacristy was added. When Kroměříž was attacked by Hussites in 1432, the church was burned down and was in a state of decay until 1500 when Bishop Stanislav Thurzo redeemed Kroměříž from a pledge and got it back under bishop administration. According to the Baroque memorial inscription, the renovation started in 1516. But extensive renovation didn’t start until about 1582. This year is written on the portal in the vicar sacristy and at the sepulchre of the main altar. Also the southern tower, unfinished until then, was raised. In 1679 the cathedral was reconstructed and equipped with furniture. In 1730, under the administration of Cardinal Schrattenbach, sepulchre chapel of Virgin Marry of Sorrows was added to the northern side of the cathedral. The founder built this chapel as his last resting place. It isn’t clear who the draughtsman was. One possibility is Ignác Cyrani von Bolleshaus who is the draughtsman of the church of St. John the Baptist or maybe Vienna architects who often worked for Moravian dignitaries in 18th century. In 1836 the church burned down. The following reconstruction was planned by designer A. Arche as a purist re-Gothicism of the temple. A baptistery and southern vestibule were added. Before 1848 both towers got polygonal extensions. Between 1960 and 1967 the exterior of the church was renovated, in 1965 it was time for the interior of the vicar sacristy and finally, from 1979 to 1980 for the church interior. 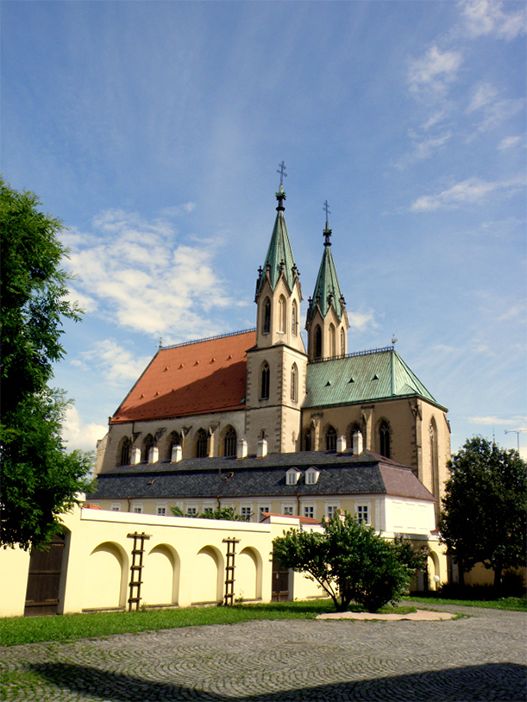 This represents the peak of Baroque architecture in Moravia. It was built between 1737 and 1768 according to the project of Ignác Josef Cyrani von Bolleshaus as a part of the Piarist College. Reminders of the consecration in 1768 are 12 bronze crucifixes placed around the perimeter of the church. The centre, with its oval body, is vaulted with a height of 35 metres. Lush fresco decorations by J. J. Edgens iconographically celebrate the patron saint of the church, St. John the Baptist. The church, which by its location and size is the dominant feature of the central part of Kroměříž, is the entrance to the historical centre. 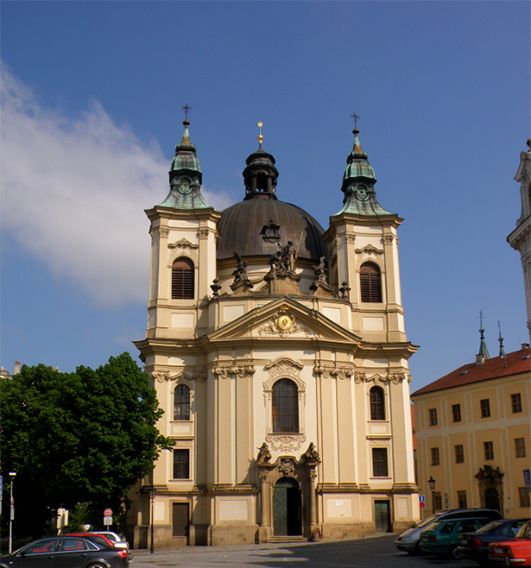 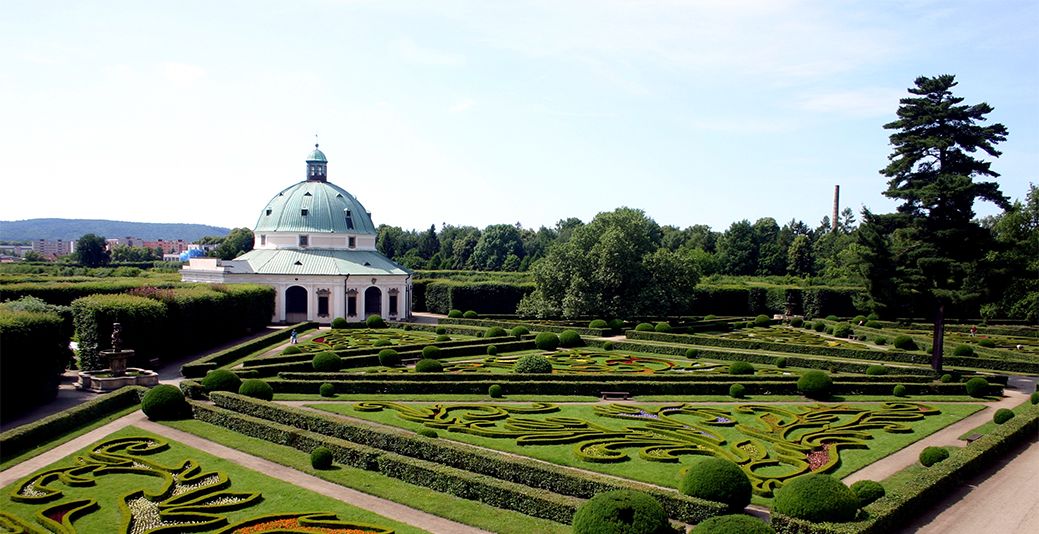 The Flower Garden, original name “Libosad”, represents a masterpiece of European garden art of the 17th century. It is a turning point between Italian Renaissance gardens and French gardens in Baroque-Classicist style such as, for example, Versailles. Today, the Flower Garden is virtually the only example of this type of composed complex in Europe. Bishop Karel II of Lichtenstein-Castelkorn ordered the building the garden outside the town walls and it was built by imperial architects between 1665 and 1675. Not even its later modifications by well-known architects, Anton Arche in 19th century and Pavel Janák in 20th century, changed its originality and the atmosphere of the time at which it was created. Hedge labyrinths, together with a 244 metre-long Colonnade, two historical greenhouses, a central pavilion (Rotunda) and flower and sculpture decorations, still offer plenty of surprising and unforgettable experiences.

The current price list is valid for 30 days from the beginning of the month. Thank you for your understanding.